Here three of the hottest nude scenes of Taylor Schilling from Orange Is The New Black. Orange is the new black is a TV series that airs on Netflix and it follows story of Piper Chapman who is sentenced to 2 years imprison for drug trafficking. It is one of the highest rated series on IMDb with 8.4 out of 10. 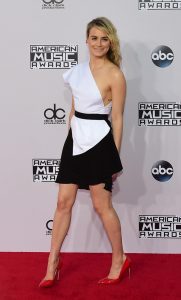 We have all been talking about the hot half baked nude and sex scenes from Game Of Thrones. But there are other tv shows which gives it strong competition when it comes to display of boobies and butt. Here are three sexiest scenes from Orange Is The New Black and I’m sure you will binge watch this series afterwards.

In this scene Taylor schilling is nude in shower from first episode of season 1. She is completely nude giving us good look at her sexy hot boobs and firm ass. This scene begins by Taylor and an unknown girl kissing under the shower both naked. Suddenly they are interrupted by the jail warden. The other girl runs away but Taylor is left behind. She covers her hand over boobs and between the legs. But we see do see a good look at her assets later when she walks out.